GDM Rent Car Georgia's weekly blog is back. We are going to tell you about one of the most beautiful and special region in Georgia, Adjara.

Autonomous Republic of Adjara is a historical, geographic and political-administrative region of Georgia. Located in the country's southwestern corner, Adjara lies on the coast of the Black Sea near the foot of the Lesser Caucasus Mountains, north of Turkey. It is an important tourist destination and includes Georgia's second-largest city of Batumi as its capital. About 350,000 people live on its 2,880 km2. Adjara is home to the Adjarians, a regional subgroup of Georgians. Adjara's name can be spelled in a number of ways, including Ajara, Ajaria, Adjaria, Adzharia, Atchara and Achara.

Christianity started to spread throughout Georgia in the 1st cent. AD from Ajara, and it became the state religion in the 4th cent. AD. The apostles Andrew and Simon preached in Georgia. According to some sources, Matthew the Apostle was buried in Ajara in Gonio. Gionio-Apsaros fortress is also associated with famous mythos about Argonauts, who landed here to find Golden Fleece.

Today, Ajara is home to a variety of religions. In the same day, you can visit Christian orthodox churches, mosques, synagogues, and Catholic and Armenian churches. In addition to religious monuments, Ajara has a myriad of unique arch stone bridges, which date back to the Middle Ages.

Batumi - the "Pearl of the Black Sea" as it is often called - is administrative centre of Ajara. European architects undertook numerous projects in Batumi at the beginning of the 20th cent. Today, Batumi is still a place of numerous architectural innovations.

Ajara is home to the picturesque beaches of Batumi, Kvariati, Sarpi, Gonio, Tsikhisdziri, Mtsvane Kontskhi (the Green Cape) and Kobuleti. During the summertime, the beaches are often crowded with tourists enjoying their holidays.

Central regional city of Adjara, Batumi is 380km far from Capital City of Georgia, Tbilisi. cheapest way to arrive here is train, but you need to stay 5hours in one space, so for tourists it's uncomfortable way. You can reach Adjara with our Rent Car Service. Choose machine, which is fully relevant with you and make comfortable journey in Georgia.

Batumi is the capital of the Autonomous Republic of Adjara and the third-largest city of Georgia, located on the coast of the Black Sea in the country's southwest. It is situated in a Subtropical Zone at the foot of Caucasus. Much of Batumi's economy revolves around tourism and gambling (It is nicknamed "The Las Vegas of the Black Sea"), but the city is also an important sea port and includes industries like shipbuilding, food processing and light manufacturing. Since 2010, Batumi has been transformed by the construction of modern high-rise buildings, as well as the restoration of classical 19th-century edifices lining its historic Old Town.

Batumi is located on the site of the ancient Greek colony in Colchis called Under Hadrian, it was converted into a fortified Roman port and later deserted for the fortress of Petra founded in the time of Justinian I (c. 527–565). Garrisoned by the Roman-Byzantine forces, it was formally a possession of the kingdom of Lazica until being occupied briefly by the Arabs, who did not hold it; In 780 Lazica fell to kingdom of Abkhazia via a dynastic union, the later led the unification of Georgian monarchy in the 11th century.

From 1010, it was governed by the eristavi of the king of Georgia. In the late 15th century, after the disintegration of the Georgian kingdom, Batumi passed to the princes of Guria, a western Georgian principality under the sovereignty of the kings of Imereti.

Batumi today is one of the main port cities of Georgia. It has the capacity for 80,000-ton tankers to take materials such as oil that are shipped through Georgia from Central Asia. Additionally, the city exports regional agricultural products. Since 1995 the freight conversion of the port has constantly risen, with an approximate 8 million tons in 2001. The annual revenue from the port is estimated at between $200 million and $300 million.

Since the change of power in Adjara, Batumi has attracted international investors, and the prices of real estate in the city have trebled since 2001. In July 2007, the seat of the Constitutional Court of Georgia was moved from Tbilisi to Batumi to stimulate regional development.[4] Several new hotels opened after 2009, first the Sheraton in 2010 and the Radisson Blu in 2011. The city features several casinos that attract tourists from Turkey, where gambling is illegal.

Batumi was host to the Russian 12th Military Base. Following the Rose Revolution, the central government pushed for the removal of these forces and reached agreement in 2005 with Moscow. According to the agreement, the process of withdrawal was planned to be completed in 2008, but the Russians completed the transfer of the Batumi base to Georgia on November 13, 2007, ahead of schedule.

In 2013, TAM GEO LLC announced it was investing $70 million to start construction of the 170-meter, 45-story mix-use complex Babillon Tower, which will be the tallest residential building in Georgia 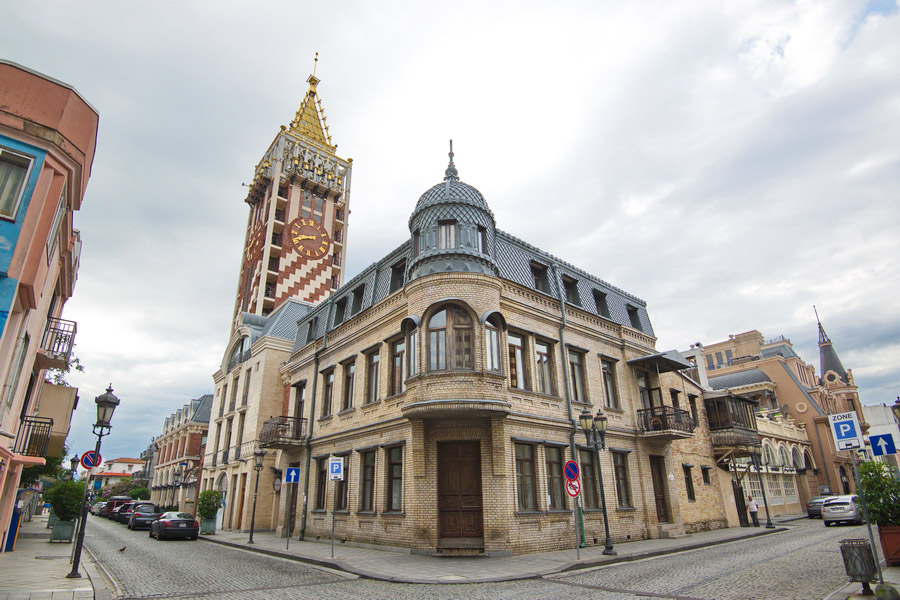 Construction of the 7 km seaside boardwalk begun in 1881 by the famous Prussian gardener and landscape architect Ressler. Two years after the project began, Ressler passed away and Michael D’alfons, a French architect, completed the boulevard. Recently, a Spanish architect designed and constructed a new, modern addition for the boulevard. The coastal line of the boulevard has been beautified with bungalows, café-lounges, restaurants, children’s attractions, benches, sculptures and dancing fountains—making it one of the city’s most attractive tourist destinations.

Construction of the 7 km seaside boardwalk begun in 1881 by the famous Prussian gardener and landscape architect Ressler. Two years after the project began, Ressler passed away and Michael D’alfons, a French architect, completed the boulevard. Recently, a Spanish architect designed and constructed a new, modern addition for the boulevard. The coastal line of the boulevard has been beautified with bungalows, café-lounges, restaurants, children’s attractions, benches, sculptures and dancing fountains—making it one of the city’s most attractive tourist destinations.

Boasting one of the widest varieties of flora in the world, the Batumi Botanical Garden was established in 1912 by the prominent botanist and geographer Andrey Krasnov. The garden is 111 hectares and contains flora from nine phyto-geographic areas: East Asia, North America, New Zealand, South America, the Himalayas, Mexico, Australia, the Mediterranean, and the Caucasian humid subtropics. Visitors can wander the botanical garden by foot or in carts, which can be rented from the garden’s administration. 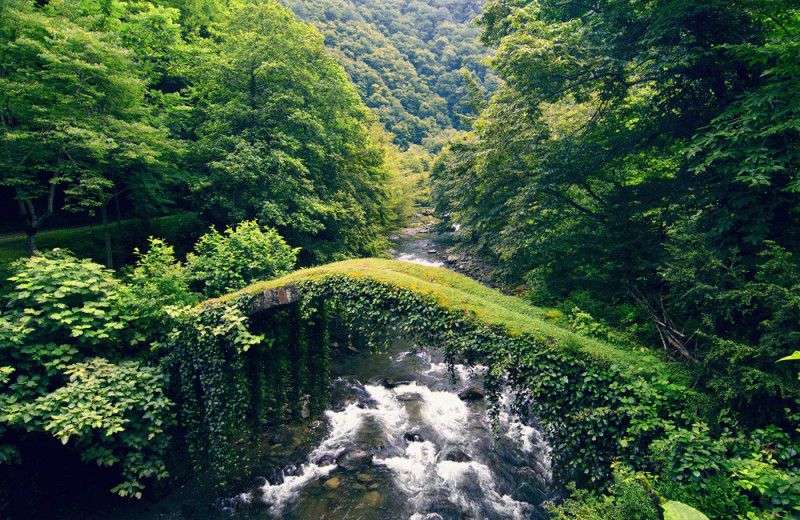 Mtirala National Park is a protected area in Adjara region, Western Georgia.[2] Covering approximately 15,698 hectares (38,790 acres) in Municipalities of Kobuleti, Khelvachauri and Keda in the western Lesser Caucasus, it is situated between the Black Sea and the Adjara Mountains. It also adjoins Kintrishi Protected Areas.

Mtirala National Park Colchic broad-leaved and mixed forest include sweet chestnut and Oriental beech woods with pontic rhododendron, cherry laurel and Colcic box understories and a variety of lianas. Fauna recorded are Brown bear, Roe deer, and Wild boar, while avifauna includes Booted eagle, Eagle owl and Golden oriole. Amphibians inhabiting the park include Caucasian salamander, Caucasian toad, Eurasian mash frog and Caucasian viper. Mount Mtirala is one of the most humid areas in the country. The name Mtirala (meaning "to cry") is derived from the 4,520 millimetres (178 in) annual rainfall, making it one of the wettest areas of the former Soviet Union. 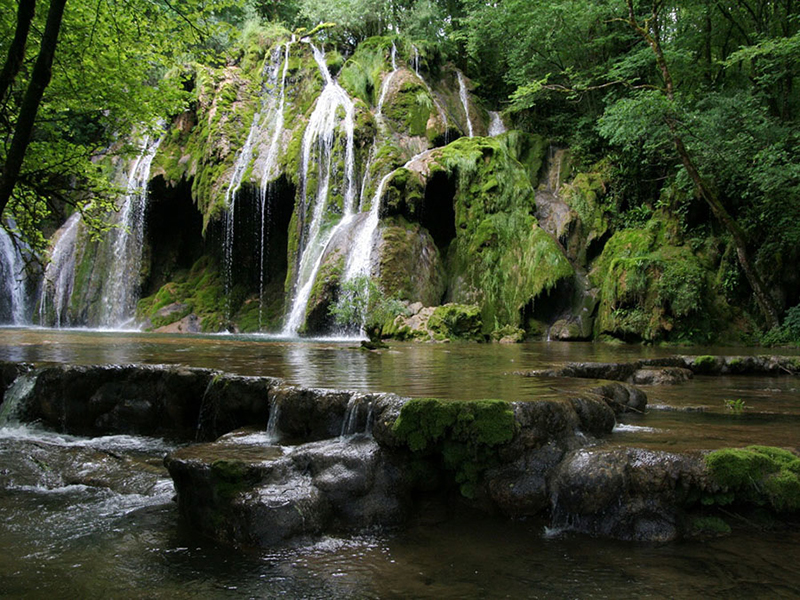 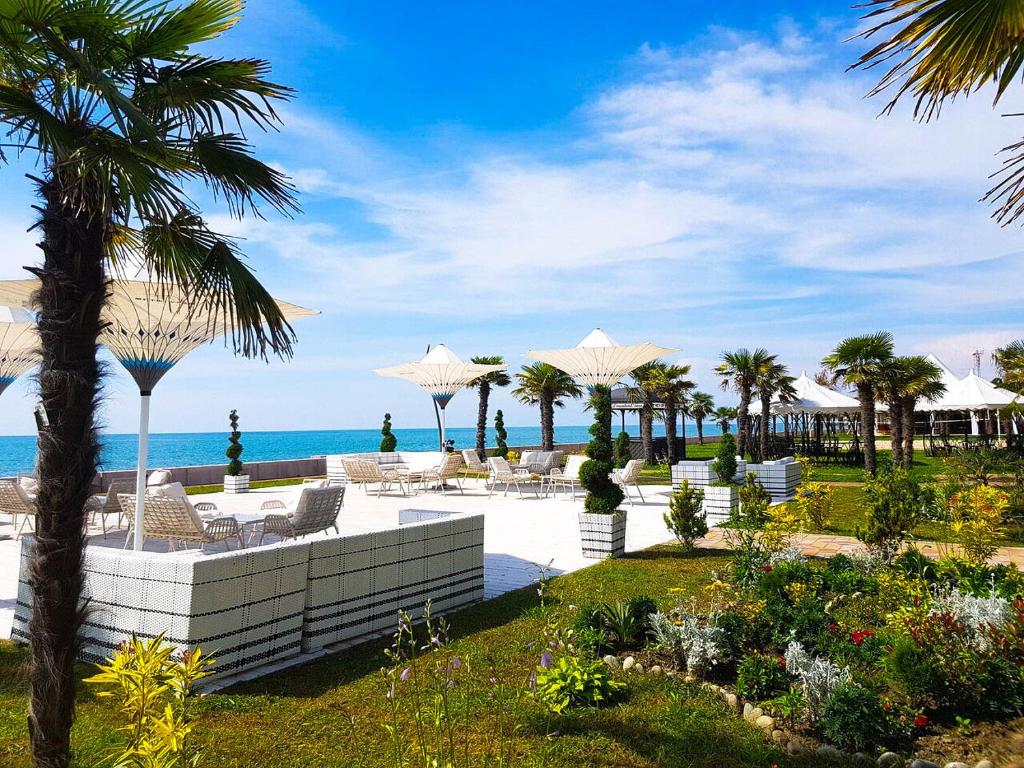 Chakvi is a resort town in Georgia by the Black Sea coast. It is part of Kobuleti Municipality.

Chakvi is known throughout Georgia as being the birthplace of tea production in Georgia. Chakvi was one of several tea producing areas that produced tea for the Soviet Union. Wild tea plants can still be found, and some limited tea production still continues, in the hills above Chakvi.

In July 2007 the $600,000 Chakvi radar station was constructed through oversight of the U.S. Army Corps of Engineers Europe District. It serves both the commercial and military port. 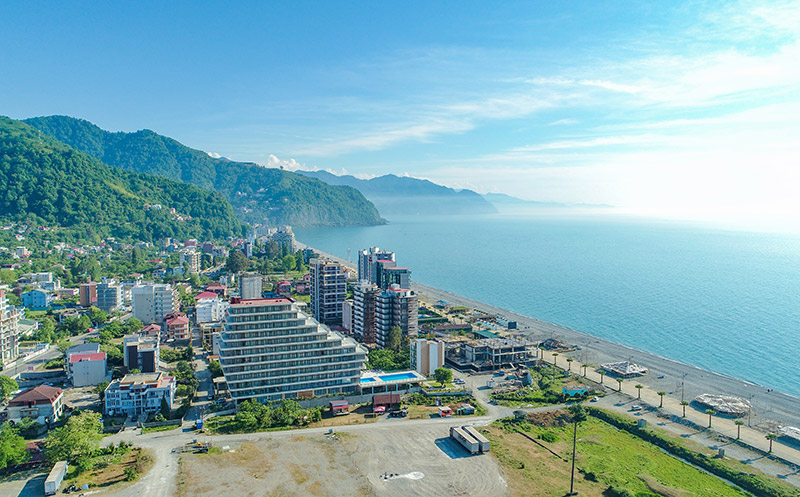 Gonio is souther-west district in Batumi and is also one of the special and popular resort in Georgia. Sea here is very blue, calm and attractive. Despite, Batumi, here is better seaside. 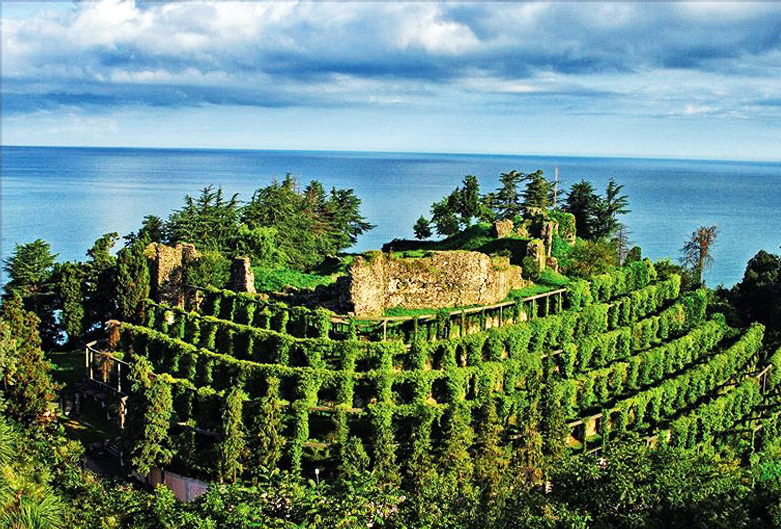 Kobuleti is a town in Adjara, western Georgia, situated on the eastern coast of the Black Sea. It is the seat of Kobuleti Municipality and a seaside resort, visited annually by Georgians and many former Soviet Union residents. It is especially popular with Armenian tourists.

The town is situated in the south-western part of Georgia, i.e. the northern part of the Autonomous Republic of Ajara. It borders with Ozurgeti Region to the north. The Regional centre is Kobuleti City, which stretches along the Black Sea shore. 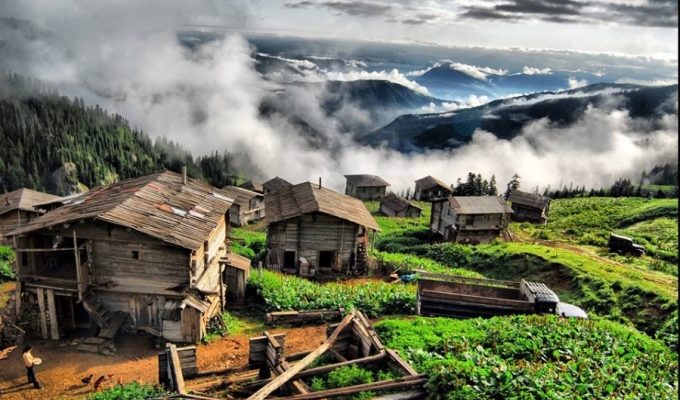 The town, formerly known as Khula and Hulo, was a merchant place located on a medieval road that linked Samtskhe-Javakheti to the Black Sea coast. During Ottoman times, Khulo was a chief settlement of Upper Adjara governed by the Khimshiashvili family. In 1829, it was briefly occupied by the Russian force of General Osten-Sacken who sacked the Khimshiashvili residence before withdrawal Khulo's population, largely Islamized under the Ottomans, diminished dramatically under the Russian oppression of Islam in the 1870s. A series of floods and avalanches in the 1990s-2000s induced another wave of migration from the mountainous villages of the rayon.

In the district are medieval historical monuments - Khikhani Fortress (10th century) where rebel against Ottoman Empire Selim Beg Khimshiashvili was defending himself until he was captured and beheaded in 1785. On the way to Khikhani fortress there is an active Monastery of Skhalta cathedral (13th century).

Besides historical monuments there are many other interesting tourist sights in Khulo district such as Beshumi Resort and Green Lake located near Goderdzi pass as well as Khulo Cable Cars which is used for daily means of transportation by the locals from Khulo to Tago village.

Khachapuri is by far the most authentic Georgian dish. Almost all regions have their own Khachapuri, but the most distinguished one is Adjaruli Khachapuri. Adjara is a seaside region, so locals justify the shape of their Khachapuri with the resemblance to a boat. Inside this boat shaped dough there is melted cheese, some butter and an egg. The entire yolk of the egg floating in the cheese signifies a sunset in the sea. This is how a dish from a real seaside nation should look like. You should mix well the cheese, egg, and butter and then start to soak pieces of baked dough starting from the outer corners. When you have eaten the sides and corners of the boat, you can roll the bottom as a tube and eat it. Even the smallest Adjaruli khachapuri is a challenge, but it will be hard to stop as the taste is so flavorful.

Achma is similar to Khachapuri, but it has several layers of tender dough, a crispy top and plenty of cheese.  One small piece, that looks so innocent can serve as a nutritious dinner. If it is the first time you taste this mouthwatering delight, know that we envy you! Borano is a traditional dish from Georgia’s Adjara region, made with Sulguni cheese and melted butter. Usually, melted butter is poured over soft cheese, causing it to melt and stretch. Borano is also often called Georgian fondue. Here we present a rather modern version of borano, which is very popular with Georgian households.
So there is some, but interesting news about Adjara. GDM Rent Car Service will be glad to guide you on this unforgettable journey and create for you comfort with any condition.